Artist Tiffany Sia presents a response to Yuri Pattison’s solo exhibition the engine. Weird Times is a chapbook by Tiffany Sia and Yuri Pattison on time-telling and hegemony. Featuring writing by Sia and images selected by Pattison, it is a brief history on the development of time-keeping technologies. While SEA – SHIPPING – SUN, a meditation on maritime trade routes, is a short film directed by Sia and Pattison shot over the span of two years to render a simulated duration of a day, beginning at twilight and closing at sunset. The film is set against shipping forecasts from archival BBC Radio 4 broadcasts. 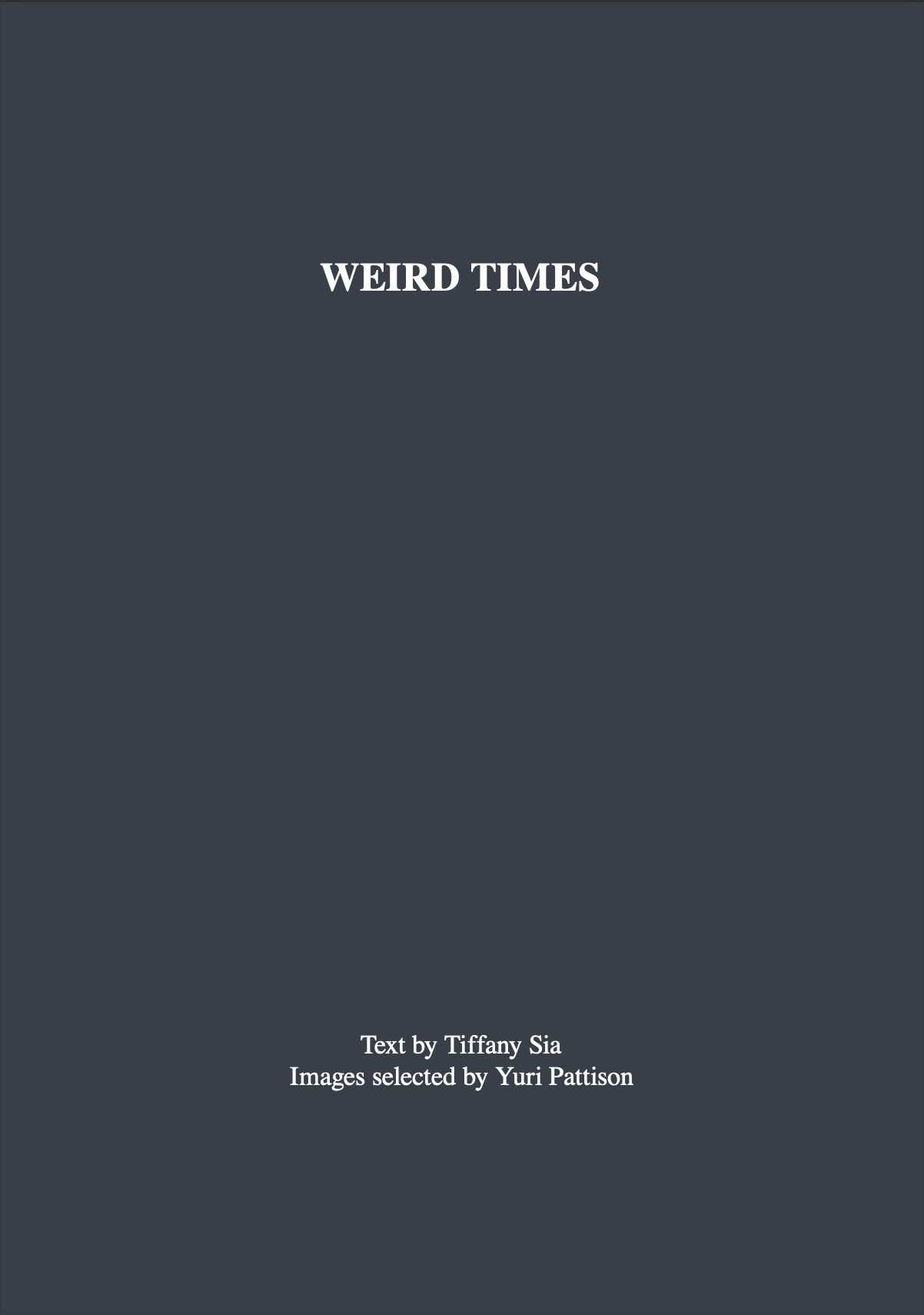 Weird Times is a chapbook by Tiffany Sia (b. Hong Kong) and Yuri Pattison (b. Dublin) on time-telling and hegemony. Featuring writing by Sia and images selected by Pattison, Weird Times is a brief history on the development of time-keeping technologies. The clock is disassembled as a political tool, a metronome of coercion and an accelerant of war power. Out of these mechanisms, resistant counter-tempos emerge.

To view digital copy, please click on the left image. Printed copies (A5, saddle stitched), available at the gallery.

How do we reckon with our attachments to place, and their knotted historical relations? A meditation on maritime trade routes, SEA – SHIPPING – SUN is a short film directed by Tiffany Sia (b. Hong Kong) and Yuri Pattison (b. Dublin) shot over the span of two years to render a simulated duration of a day, beginning at twilight and closing at sunset. The film is set against shipping forecasts from archival BBC Radio 4 broadcasts. The sun emerges and disappears, again and again.

Issued by the British Meteorological Office on behalf of the Maritime and Coastguard Agency, the shipping forecast functions to disseminate “gale warnings for seafarers and [communicate] weather information from coastal stations,” originating in a time before GPS and satellite telecommunication technologies when sailors had only the radio to rely on. These broadcasts, continuing a British maritime tradition and no longer serving a practical purpose, are purely nostalgic. Sia and Pattison draw from the poetics of the shipping forecasts and reassemble recordings pulled from two pivotal dates of recent history, 23 June (i) and 30 June (ii), and set them against an anachronistic setting of shipping channels in Hong Kong.

Multiple scales of time and place come to the fore. Are historical shifts seeable? The term “sea change” originates from Shakespeare’s The Tempest:

Full fathom five thy father lies; Of his bones are coral made: Those pearls that were his eyes; Nothing of him that doth fade,  But doth suffer a sea-change Into something rich and strange.

The contemporary usage of the idiom, denoting a paradigm shift, obscures the original meaning that Shakespeare intended. Here, “sea change” describes a putrefaction of a corpse brought on by the organisms and salt of the ocean bed. The sea contains a submerged history. Currents trace trade routes, and also draw a means of escape. While the sea binds communities together, it also disappears and drowns them. An ambient archival broadcast roils over footage of sea channel traffic.

In the detritus and wakes of empires, these times necessitate embracing the eternal restlessness and statelessness that befalls the fate of a colonial or postcolonial subject. Achille Mbembe warns that to bind oneself to a fixed notion of place threatens “fixation, confinement, and strangulation, as well as the threat of disassociation.” (iii) Inspired by audio and visual media, from lullabies to ASMR videos, created with the intention of inducing sleep or relaxation, SEA – SHIPPING – SUN gathers a vision of entanglement. We are left with history’s residue: A gentle, rocking waltz over the sea.

(i) 23 June 2016: Brexit or EU referendum took place, resulting in 51.9% votes cast were in favour of leaving the EU. 23 June 2021: The pro-democracy newspaper Apple Daily announces its final edition will be released that Thursday, 24 June 2021 after five top executives were arrested under the national security law and the company’s assets were frozen.

(ii) 30 June 1994: 1) Patten Proposal goes into effect, countering a formal notification from Beijing that Hong Kong’s Legislative Council replaced by a “legal representative institution” after 1 July 1997; 2) Hong Kong Clock was unveiled in Tiananmen Square and began to count down the days and seconds to 1 July 1997, the handover of Hong Kong. 30 June 2020: Hong Kong’s National Security Law was signed, passed and took effect at 11pm. 30 June 2021: Deadline for most European Union citizens to apply to live permanently in the UK as settled residents after Brexit.

Tiffany Sia is an artist, filmmaker and founder of Speculative Place. She is the author of 咸濕 Salty Wet, a series of anti-travelogues on smut, affect and history of Hong Kong. The first zine, in the disguise of a vintage softcore porn magazine, was published by Inpatient Press. A book-length sequel, Too Salty Too Wet 更咸更濕 was released through Speculative Place Press in January 2021. Sia is the director of the short, experimental film Never Rest/Unrest, which screened at MoMA Documentary Fortnight and as part of a retrospective in the Propositions program at Berwick Film & Media Arts Festival. Sia’s first institutional solo show at Artists Space featured moving image and text-based works, including a durational, live-streamed landscape film A Road Movie is Impossible in Hong Kong. Her writing and conversations have been published in Triple Canopy, Light Industry, LUX Moving Image, Screen Slate and more

Back to Art & Ideas
Next

Using key critical ideas presented by the exhibition programming, the Response Series presents experimental and transdisciplinary collaborations between exhibiting artists and other artists, writers, researchers or experts. On this occasion, we invited Dean Kissick, writer and New York editor of Spike Art Magazine to respond to Yuri Pattisson exhibition the engine. The collaboration between Dean […]

As part of our An Artistic Eye Series we asked Alice Rekab: how do they become and artist? What is the best thing about being an artist? What do they all day?