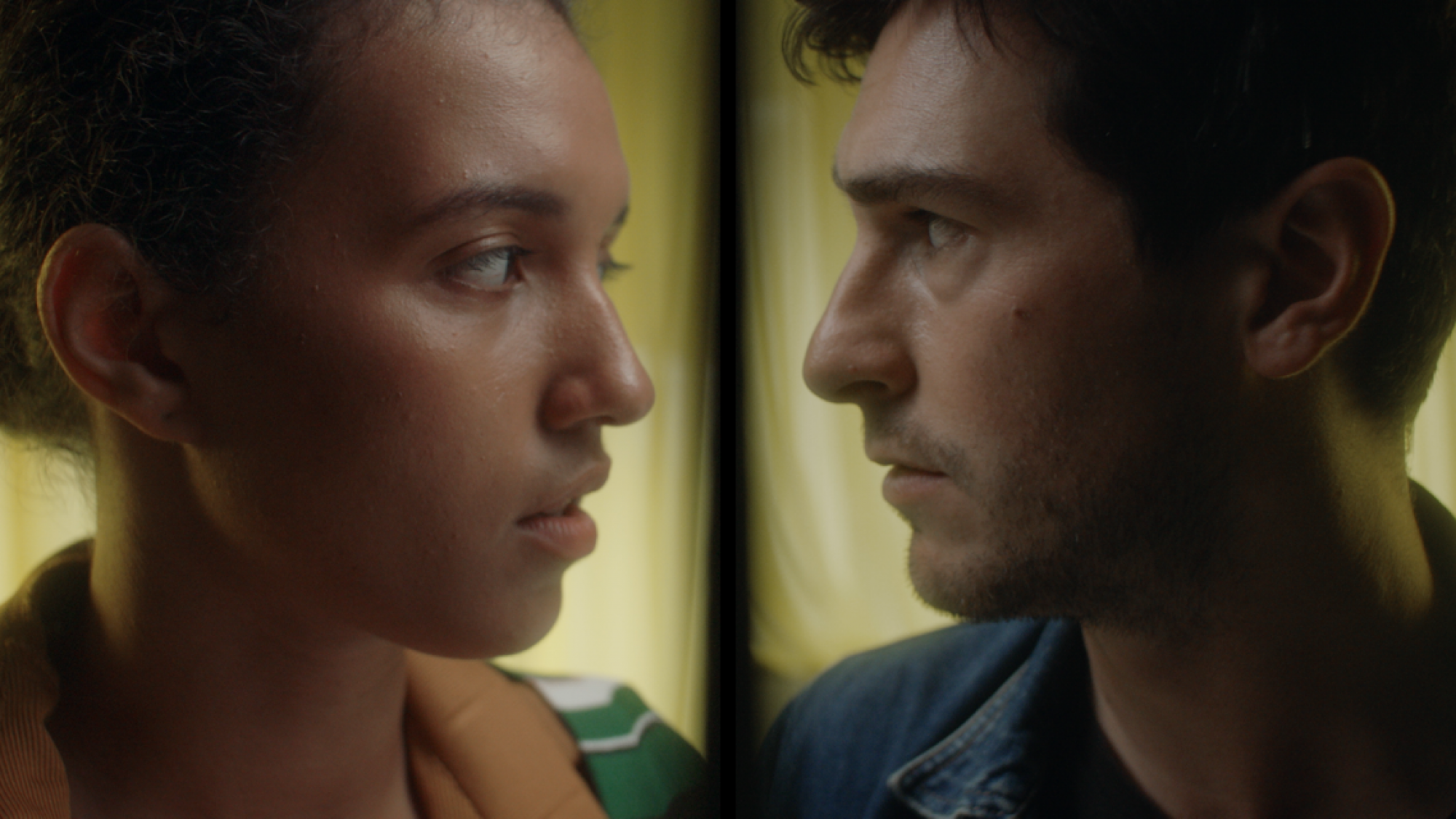 The Douglas Hyde is delighted to present the sixth of the screenings of Art from the African Diaspora as part of Alice Rekab’s multi-platform project FAMILY LINES.

Aiming to platform the voices of other artists of colour and to represent intergenerational legacies of self-representation in the production of film, writing and visual art, Alice Rekab and The Douglas Hyde have invited Larry Achiampong to co-curate the screening series by selecting a film that influenced and/or inspired him. Achiampong has invited London-based artist Jennifer Martin to screen her work TEETH (2019).

In TEETH a couple interrogated by UK Home Office agents endures a series of assessments that become progressively performative to evidence their relationship’s legitimacy. The office space becomes a theatre stage for a gruelling audition of acceptability. Awkwardness quickly escalates into surreal horror.

We will also have a special in-person screening of The Expulsion by Larry Achiampong and TEETH on 10 March at 6pm. For more details see the event page here.

Considering the crossovers between his film The Expulsion and TEETH, Larry Achiampong has created the below introductory sound piece to accompany both films.

Larry Achiampong Remarks: The Expulsion and TEETH by Jennifer Martin

TEETH addresses the entanglement of love, power, and administration in the UK spousal visa process. In January 2017, former Home Secretary Amber Rudd wrote, ‘illegal and would-be illegal migrants and the public…need to know that our immigration system has “teeth”‘. Her letter, written to then Prime Minister Theresa May, was leaked in April 2018 amid reporting on the Windrush Scandal. Teeth are the bite of the UK immigration system, its violence and desirous devouring.

In TEETH the Home Office sites operate not only as interrogative spaces but theatrical spaces akin to the stage and the audition room. These sites function to produce and evaluate belonging, borders, and national identity through the framework of immigration and intimate bonds. The fictional interview in TEETH is not a carbon copy of the experience. The interview practices are primarily based in reality—the communication evidence being a requirement for spousal visa applications—but the staging strives to convey the emotional reality.

Jennifer Martin (1990, USA/UK) is a London based artist filmmaker. Since graduating from the Slade School of Fine Art and Royal College of Art, her films have been screened at festivals including BlackStar, British Shorts Berlin, SOUL Fest, EMAF, Alchemy Film and Moving Image, RIDM, and more. She was awarded the 2018 Stuart Croft Foundation Education Award and selected for the FLAMIN fellowship 2019/20. Martin is a Film London Lodestar 2021 and winner of Best Screenplay at SOUL Fest 2021 for ‘TEETH’. She is a co-director of the black and POC-led artist workers’ cooperative not/nowhere, specialising in analogue film.

As part of our Response Series, The Douglas Hyde is delighted to announce a Writer’s Response where writer and editor Anna Walsh will respond to the work of Jennifer Mehigan and her current exhibition in Gallery 2 as part of The Artist’s Eye programme.

As part of our Response Series, The Douglas Hyde is delighted to announce a Writer’s Response where writer Stephen Sexton will respond to the work of Bassam Al-Sabah and his current exhibition: IT’S DANGEROUS TO GO ALONE! TAKE THIS

Tour of the exhibition IT’S DANGEROUS TO GO ALONE! TAKE THIS by Bassam Al-Sabah led by the Student Forum Group The Student Forum is a group of students and recent graduates who engage with The Douglas Hyde and its programming in different ways over a period of twelve months. These engagements include leading tours of our […]

The Douglas Hyde is very pleased to announce an In Conversation event where our Director, Georgina Jackson will talk to Bassam Al-Sabah and Jennifer Mehigan about, amongst other things, their collaboration on the IT’S DANGEROUS TO GO ALONE! TAKE THIS  and Nightbloom Chokehold exhibition projects. THIS EVENT IS FULLY BOOKED. Please complete the booking form from […]